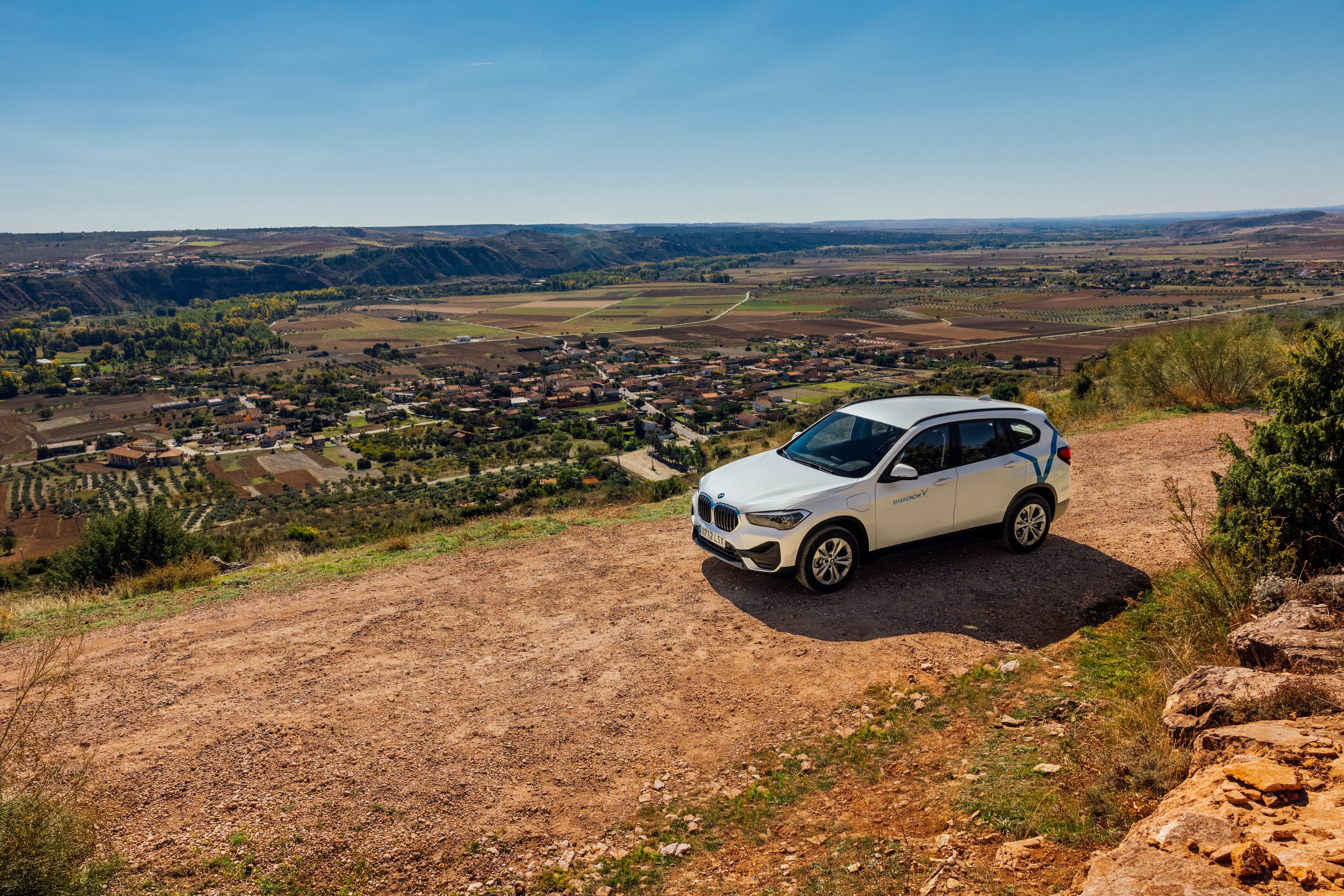 The best day trips in Madrid

With SHARE NOW you can rent our free-floating cars at hourly rates for 2, 4 or 6 hours. These are ideal for day trips, as they keep stress and time-related pressures at bay. In addition, you can find attractive daily rates if you want to spend a little longer in the countryside. Our cars are also available for trips of up to 30 days with attractive long-term rentals. If you are in Madrid, you should definitely set aside some time to take a trip to some of the most interesting places near the capital.

Hitting the open road is all about freedom. In the right car, with the right people, at the right moment, the destination is trivial - it's all about the journey. At SHARE NOW, we're helping to create those magical memories. We've put together our best driving tours from the Madrid home area, so you can embark on an unforgettable road trip to the historic cities of Toledo, Segovia and Alcalá de Henares, the monastery of El Escorial or the palace of Aranjuez. Leave the city behind and go on an adventure!

Madrid offers many cool activities. However, sometimes you just need a break from the hustle and bustle. That's why SHARE NOW not only offers you a car at the right price to drive in Madrid, but also inspires you to take excursions. On this page, you’ll find the most popular destinations around our SHARE NOW city.

Toledo is the living image of more than 2,000 years of history. Once a Roman municipium, the capital of the Visigothic Kingdom, a fortress of the Emirate of Córdoba, an outpost of the Christian Kingdom, and in the 16th century, the temporary seat of supreme power under Charles V, Toledo is known today as the City of Three Cultures.

It is an obligatory stop for history lovers as Christians, Muslims and Jews lived together there peacefully for centuries, respecting each others' customs and privileges. The great attraction of Toledo is that it has managed to preserve its historical configuration, and as you stroll through its streets you will see that every corner oozes with history. Toledo is one of the best-preserved and most beautiful medieval cities in Spain. Thanks to this great example of tolerance, Toledo preserves a great legacy of buildings and architectural elements typical of each religion. Toledo Cathedral, the Mirador del Valle viewpoint, the Synagogue of Santa María La Blanca, the Monastery of San Juan de los Reyes, the Alcántara Bridge, the Alcázar, the Church of Santo Tomé and the Plaza de Zocodover are just some of the many magical places in the city of Toledo that are a must-see. To get there, just take the A-42 motorway, which is free of charge. • Image: Toledo © Wei Hunag / Unsplash
Back to top ↑

Much more than an aqueduct

Segovia is a city that will make you fall in love at first sight with its fantastic old town taking you back to medieval times. The World Heritage Site is located an hour and a half by car from Madrid, in the province of Castilla y León.

Visiting Segovia is one of the most recommended excursions you can do in the surrounding area of Madrid. If you are going on a sightseeing trip, consider discovering architectural gems such as the Roman Aqueduct, the Cathedral and the Alcázar. Moreover, it is worth climbing the ancient walls that surrounded the city, getting lost in the Jewish quarter, going to the Mirador de la Pradera de San Marcos viewpoint and, of course, tasting the famous roast suckling pig. You can visit all of these monuments, tourist attractions and charming spots in a single day. However, Segovia might just be the perfect place for a weekend getaway. If you spend the night, you'll get a chance to take relaxing walks through authentic Segovia, when most of the tourists have already left. • Image: Segovia © Marco De Hevia / Unsplash
Back to top ↑

We know what you're thinking: Miguel de Cervantes! Spain's most celebrated writer is synonymous with this city of Roman and Arabic heritage. And no wonder, as you can visit the Cervantes Birthplace Museum, which is one of the most famous tourist attractions.

To complete your experience in Alcalá, we recommend a stroll along the famous Calle Mayor, the longest arcade street in the world. Don't forget to visit the ancient University, founded in 1499 by Cardinal Cisneros. The historic campus is beautifully integrated into the city's architecture and will transport you back to the Golden Age. The most emblematic building is the rectorate with the picturesque façade of the Colegio San Ildefonso in the Plateresque style built in the mid-16th century. Every year the Cervantes Literature Awards are presented in this historic college. Its lively streets, restaurants and bars will welcome you, and you will soon understand why the city of storks is such a popular destination. As Don Quixote once said, "a good deed never lacks a reward", and a road trip to Alcalá de Henares is 100% worth it. Getting there is as easy as following the A-2 motorway towards Zaragoza. It takes around 40 minutes. • Image: Alcalá de Henares © Charles R. Goodson / Pixaby
Back to top ↑

Do you want to discover another of the best excursions from Madrid? Don't hesitate to spend half a day to visit San Lorenzo de El Escorial. We bet more than one of you has lived in Madrid for years without ever making the trip to this famous monument.

It's a trip not to be missed. The monastery awaits you there, declared a World Heritage Site by UNESCO, and whose interior hides secrets of Spanish history. It is a huge 16th-century monumental complex which, in addition to the monastery, houses a royal palace, a pantheon, a library with more than 40,000 valuable old books and a basilica. It was once considered the eighth wonder of the world. You will also discover a charming village in a beautiful natural setting at the foot of the Sierra de Guadarrama. This place is a must for lovers of history and architecture. To get to El Escorial from Madrid, you can take a SHARE NOW and get on the A-6. The journey takes approximately one hour in each direction. • Image: El Escorial © ajgpfotografia / Pixaby
Back to top ↑

For centuries, the kings and queens of Spain have chosen to spend the spring and summer months at Aranjuez Palace, located in a low meadow formed by the confluence of the Tagus and Jarama rivers. We recommend that you take a car and head south from Madrid, 49 kilometres away on the A-4 motorway.

We definitely recommend that you visit the main attractions: the Church of Alpajes, the Prince's Garden, the Chinescos Pond, the Museum of the Royal Falúas and, of course, the Royal Palace, where a guided tour booked in advance will allow you to learn more about the history of the city. During your visit, you will enjoy losing yourself in its beautiful gardens, unique in the world. As one of the most beautiful cities in the Region of Madrid, Aranjuez will surprise you with its social, cultural and gastronomic offer, and the atmosphere of its streets will undoubtedly make you fall in love with it. Thanks to its impressive gardens, Aranjuez was declared a UNESCO World Heritage Site in December 2001. Still not convinced? Well, think about it this way: if the royals have decided to spend their leisure time in Aranjuez, who says you can't do the same? • Image: Aranjuez © Miguel Ángel Sanz / Unsplash
Back to top ↑

Charge up before your trip

To make the most of your road trip, charge your car for free at one of our charging hubs in Madrid. Currently, it is only possible to charge within the city of Madrid at our partner charging hubs. Please bear this in mind, as your SHARE NOW car must have enough battery to make the round trip to your destination and back to the Home Area. To find out more, check out our complete charging guide.

No time for charging?

Our BMW X1 Plug-in Hybrid saves the day. Thanks to its size and hybrid propulsion system, it's the perfect car for longer trips. You can fuel at our Cepsa partner fuel stations and pay with the complementary fuelling credit card inside the car.

Choose the best SHARE NOW car for your next adventure

Feeling the Wanderlust? Choose your adventure. All prices include fuel and basic insurance. Pre-booking is free for trips of 1-30 days, and we'll even deliver the car to the pick-up address of your choice. See all cars →

The prices depend on the car model, location and starting time of your reservation or rental (if you have not reserved in advance) and are currently only valid in Hamburg, Munich, Berlin, Cologne and Dusseldorf. Prices from 0,09 € only apply for the car types, "Fiat 500", "BMW i3", “Peugeot 208” and certain MINI models and depend on location and starting time. Before you start the reservation or rental via the app, you will be asked to confirm the respective price.

The minute rate includes 200 km of mileage. A long distance rate of 0,39 € per kilometer will apply for each additional kilometer after the included mileage. Hourly and daily rates do not include mileage and each kilometre driven will be charged 0,19 €. The daily price displayed is for a 30-day rental.

All SHARE NOW cars are covered by third-party liability insurance and your deductible is always automatically reduced to a specific amount in case of an accident. This agreement is waived, however, in cases of gross negligence. To learn more, please check out our terms and conditions.